Design Patents ~ When Should Inventors Get One?

Design patents are often misunderstood and dis-respected. However if they are used properly they can be of value to an inventor.

What's the difference between design and utility patents?

Utility patents protect how a product works and a design patent (DP) protects the ornamental appearance of a physical product. Utility patents in general offer much stronger protection than a DP can in most cases. The reason is that most DP's are easier to "design around". This can be done by making changes to the appearance of an item which effectively creates a work around to the patent.

There are advantages to DP's however. One big advantage is that they are much less expensive that utility patents. The average cost of a DP is around $1700. You will pay about 4 times that on average for a utility patent. So compared to utility patents, DP's are cheap but how useful are they?

The products that are best suited to and most broadly protected by a DP are products with unique aesthetic features or qualities. A good example is the patent below. 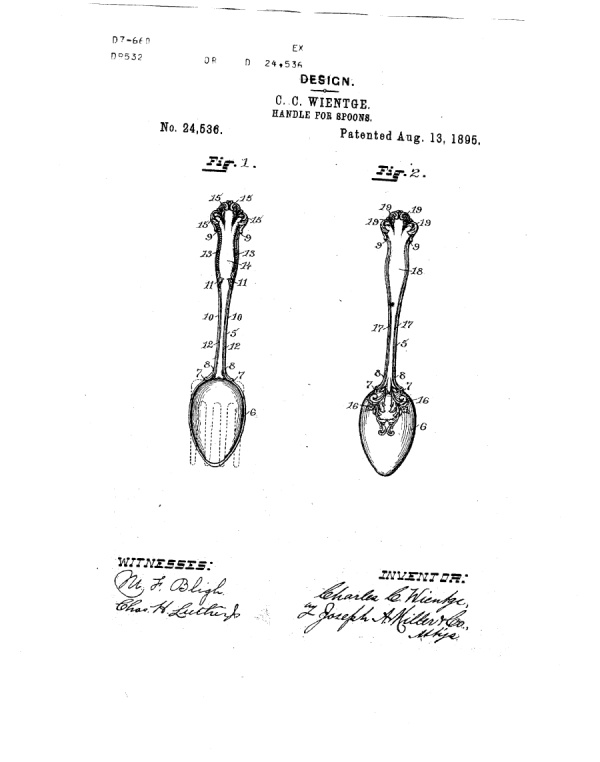 The ornamental features of the spoon handle are unique and patentable but only by a DP.

By obtaining a patent on the design, the manufacturer is able to ensure that no one else can sell the same pattern for the life of the patent. A utility patent on this spoon would be impossible because there is nothing novel about how the spoon works. The design is the only thing different from any other ordinary spoon.

Other ways to use Design Patents:

For inventors, a DP can serve other purposes. By filing and registering a design you immediately get patent pending status on your invention. The words patent pending are valuable to an inventor and can be used to open up doors that might otherwise be closed. The other advantage of this type of patent is that about 90% of them get issued. When you compare that to the issue rate of utility patents at around 40% after multiple office actions this can be very attractive.

In my own experience there have been a few times when I wished I filed for a DP. One example is a toy product that I developed. I had a lot of time and money wrapped up in this product and I had sold it to a manufacturer. Unfortunately the only way to get the deal done was to make the sale contingent upon the patent issuing.

I only filed for a utility patent and the patent office was being very difficult. After receiving my third rejection I was really worried. What I should have done was filed for a DP at the same time as I filed for the utility patent. Then I would have been ensured of an issued patent. Instead I had to sweat it out with the patent office until they finally agreed to our arguments. The patent was finally granted but it was an expensive and lengthy process, it took 3 years.

If used properly design patents can be very helpful to inventors. To do so you have to understand their advantages and limitations. I know I will strongly consider one on my next invention.