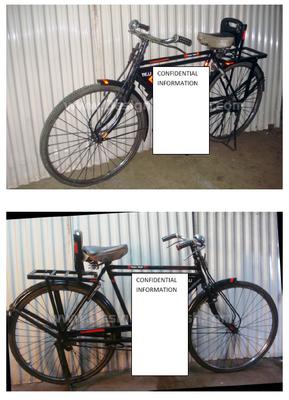 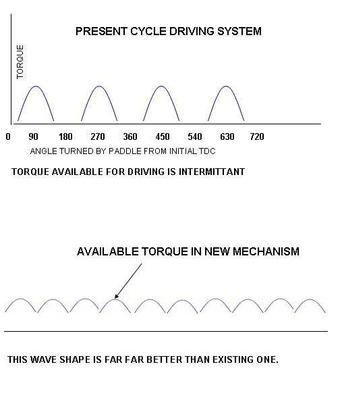 I HAVE DEVELOPED A NEW DRIVING MECHANISM FOR A BICYCLE OR RICKSHAW.

IT HAS ADVANTAGES OVER CONVENTIONAL SYSTEMS.

PATENT PENDING IN INDIA; A PROTOTYPE HAS BEEN MADE PROVING CONCEPT TECHNICALLY

I AM READY TO SELL /LICENCE THE INVENTION FOR COMMERCIAL DEVELOPMENT & SELLING RIGHTS ON MUTUALLY AGREED TERMS & CONDITIONS.
IN CASE YOUR COMPANY IS INTERESTED, PL. CONTACT ME. MY MOBILE NO. IS +919424140739.

Although the Bicycle is a very old invention, the basic mechanism of driving has remained the same without any major change over the years. Based on personal driving experience & by observing others, I had tried to study this mechanism in depth & have found the following disadvantages (potential for improvement) in the existing system.

1. One leg driving only: In circular peddling system, one leg only is used for giving motive force at any instant of time. The driving takes place due to left and right foot pressing the paddle downwards one by one (alternately).

2. Partial are driving: Out of the complete circular rotation of the paddle, only around 50% of movement is utilized for driving while other 50% is just moved for bringing paddle into the next driving place.

Here it is to be noted that no driver puts his efforts for driving the paddle when it is vertical at dead center. He starts exerting pressure only when the paddle has made about 40-50 deg. angle from vertical, hence driving torque is zero at paddle orientations of 0, 180 deg. and their multiples.

3. Maximum force applied on the peddle is generally less than drivers own weight: In normal driving the driver remains seated on his seat and applies downward force on paddles as much as he can without lifting himself from the seat. Obviously, this force is much less than his weight. His legs are naturally capable of lifting more than his own weight if required, but this capacity is not utilized.

4. Applying force more than driver’s own weight: For applying force more than his own weight, a driver feels that normal driving with sitting positions is not adequate. In such conditions, he stands on the paddles and applies his full weight on the paddles. When this also becomes insufficient for required acceleration, he “pulls the handles up” for getting more downward reaction transmitted to paddles. This reaction is transmitted through tension in driver’s hands and stress in his back in very inconvenient posture, which causes back pain and associated
fatigue.

5. Limitation of force application due to relatively straight leg:

During cycling, the work done comes from movement of muscles of legs, which is nothing but changing angles of thighs and knees. For any particular driving rotation of paddle (segment of driving rotation of paddle) the angle turned through by thighs and knees can be an indication of work done assuming that maximum possible force (constant) is applied all the time. Since the peddle during its driving segment of rotation, lies very much below the seat of the driver, the leg remains relatively straight and this angle turned through by thighs and knees is not much. Also the force which fully bent leg can apply easily is difficult to be applied by a leg, which is reasonable straight with only little bending at thighs and knees.

Considering all these demerits, I had tried to devise a new system, which addresses these disadvantages & offers improvements in all these aspects. I was able to devise such a new system that has advantages over the existing system as mentioned below:

1. Both legs can drive simultaneously: Due to independent nature of driving, both of the legs can be utilized for driving simultaneously whenever required. This will help in dead start or
accelerating with high load at step gradients or rough tar rain etc.

3. More force than driver’s weight can be applied without fatigue. The backrest provided will give support to driver in such a way that by utilizing reaction from backrest, the driver can put on force more than his own weight whenever required.

4. No stress in portion above the waist: Due to same backrest,there will be no stress developed above the waist and back pen and hand tension will be eliminated.

5. More angle turned by thighs & knees ensure more force available when required: Due to position of seat and paddle, the angle turned through by thigh and knee for any stroke of driving will be more than corresponding angle in case of ordinary cycle (rickshaw)hence there will be more work done available per driving stroke of the paddle.

6. Crippled persons can use their able leg: The same system of driving can be utilized for handicapped person’s tricycles. In these, the handicapped person can use his able leg along with his hand for driving the tricycle. If the amputation of a leg is below the knee; than he can use even his stump as well as his able leg for driving with the help of suitable padding and paddle modification.

7. Easy adaptability for existing manufacturers: Once this system proves its utility and is accepted for increased speed /load carrying capacity of rickshaw, the existing cycles or rickshaw manufactures can easily convert to this design without altering many of their facilities.

I AM READY TO SELL THE INVENTION ALONG WITH PATENT RIGHTS /COMMERCIAL DEVELOPMENT & SELLING RIGHTS ON MUTUALLY AGREED TERMS & CONDITIONS.