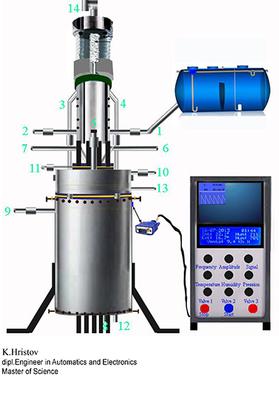 The first invention is complete device (system) that produces electric energy, consuming a main power from an external battery just for the first 10-15 minutes, after that time, it left running self-supplied by itself, without power supply- (round 0 W / h).

This device having dimensions 1.85 m tall and 70 cm diameter (look bellow) in one of its areas. My advanced calculations gave me result, the system will consume an amount 2 up to 3 kg cheap matter, feeding a large detached town with electricity.

The system must be installed underground in a slab of concrete bunker and a small air outlet for get out fresh oxygen that is occurring on the same system as a product to the atmosphere. The separated oxygen during operation will have a high temperature, that instead of cooling in additionally, it could be used to heat the same house with very hot air flow or heat the swimming pools water.

This system besides serving for producing electro energy, it can be applied with 100% success in all internal combustion engines --- cars, trucks, buses, boats, replacing 100% any engine´s fuel, natural gas, methane Gas, gasoline or diesel - 100% Green Energy.
The heating of our houses will not need Air conditioner devices, which consumes so much energy, too.

It is a system which is very complicated, using some very well known in the world discovering, one century ago. My system additionally has improved a thousand times this well known process.

The scientist, who discovered this chemical process, simply discovered and left it, because it is not at all effective. They achieved to produce electric energy with a NEGATIVE COEFFICIENT OF EFFICACIES (producing less energy, than consuming at the same chemical process).

That is why, 100 years later this wasn´t
being implemented in any field of life and the global industry.

The difference in my system between the other process, which was discovered by other scientists one century ago, my system is using ONLY in the first 15 minutes so small power supply consumption(although this starting consumption of electro energy from small battery, the system realize so increased POSITIVE COEFFICIENT of ENERGY manufacturing(almost 100%), just consuming an 1 KW / h from external battery during just during the first 15 minutes and then producing permanently 10MW/h or even several times more output electro energy), after that the same system continue operating lonely by itself, without any external power supply (authentic /0/), which increase even more the starting POSITIVE COEFFICIENT from 80% to 100%.


It is fed, just by itself, consuming so small QTY (3 to 5 kg) of cheapper matter per day, even less( may be it could be reduced to 1 kg per day, but I have to make sharp testing of the ready real system) to feed a very large town with 100% electro energy power.

This invention will be also very effective, applying it for supplies the engines of boats, trucks, trains, cars, factories, towns and so one....

Also all cargo boats, will decrease dramatically its costs of fright ship spends, reducing the price of all kind of goods in the world. That reducing will bring dramatically changes to our life and the world´s manner of life.

Will disappears the wars for petrol. It will disappear the Earthquakes, caused by empty petrol wells. Also it will disappear the ozone hole, the gas pollution…….in general we will survive the nature and the Earth. I need a Sponsor, who is not depending by the Petrol Manufacturers, because my invention is appointed 100% against them.

Also all liquid waste matter in the world could be used in place of the special matter.
The people will need less daily money for follow the same their Previous habitual life, what is meaning they will safe more money or Just the people will spend less hours to work, in order to cover his life´s spends…….

At last, the same inventor (it´s me) and the Financier of this project shall obtain big benefits, too. I can´t make calculations of so big digit amount, but it will be uncalculated amount, so big, because this invention will be applied in all of the fields in our life in whole of the Globe.

In additional, we can use one of the operational process of this my
Invention to supply the Earth with artificial SUN, because what I am using in my invention is the Nuclear FUSSION (without any radiation),

Which is the main consistence of our Earth’s SUN. Even our BIG SUN disappear some day, yet we will have our own artificial SUN.

The cost of the prototype, being prototype, which will occur for the first time in the world, will have its adjustments and tests; also I have to use expensive materials such as special kind of metals, which are used in the NASA for the open space.

Also I will use special intelligent electronic components, enduring the destructive effect of high temperature for nominal internal functioning. I will use some mechanical parts (cute by laser-cute 3D CNC machines), because they should be very precise in facts. I will using micron distances in the such large apparatus, what suppose so big precision, than either normal.

I must leave the device well done made, appropriate for future producing in series and if necessary maintenance or repair, that can be done without the system is pulled, because it is not cheap unite, it will be so modern last generation robotic device, 100% automatized. In fact the system was designed by intelligent electronic high-level system and components, being controlling by it. Even if something goes wrong, before it stops functioning and the maintenance personnel being alarmed by distance (Ethernet or Internet).

By the way this system, could be handle by Internet by PC or Mobile devices, too, it is trying to solve the problem by itself. It will be very strange thing can happen, so that the same electronic system cannot fix itself any error or other malfunction.

The system contains around of 10 pcs 64-bits Microprocessors. The entire Embedded Firmware inside of the Micros was made by me. HW design and PCB, design of all mechanical parts, is also made by me.
This system will have a big success incalculable, if someone is funding this project.

I have developed theoretically, tested with engineering and simulation programs for about FIVE YEARS AGO, looking for the actual realization. I am concerned that every time the world is developing more and more new energy systems and I will be not wondered, if some other country takes this invention soon, overtaking me.

It's a pity that 5 years nobody has not heard anything about that, now something is being done with the hybrid cars, but still it is not what I am offering. My system is not powered by electricity or gasoline or diesel.

One trailer (big truck) can pass full loaded with 22 tones load more its own weight, with my system a distance of 1000 km with only 5 kg of this matter.

About the ships, I didn´t do any calculations, because I have no idea what size of engines they are using, but always my
Invention will be win 1000 times more the habitual present engines, Because the cheaper fuel, which I am offering.