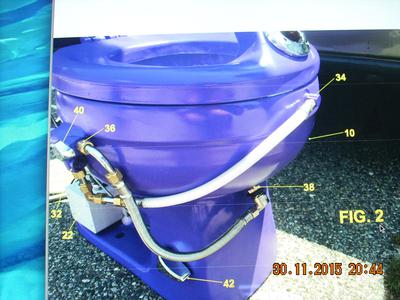 We have an invention and need help. The invention is a hygienic toilet providing washing/drying of the user.

It is NOT simply a combination toilet/bidet.

The hygienic toilet has a unique design to allow for COMPLETELY hands-free washing/drying.

Such a feature would be especially desired for the elderly and disabled. (I had family members who were disabled; and this toilet would have been ideal.)

It is highly recommended for the Arab world.Additionally, the toilet allows for water conservation; and the user does NOT require toilet paper.

We have a WORKING PROTOTYPE. A PCT Patent Application Serial No. PCT/US16/51104 for:
Hygienic Toilet with Washing and Drying Means
Our Docket: 2503-2 PCT

Alternatively, we are willing to sell all rights to the invention, or partner with an interested party.

Please contact me with any queries and/or for additional information.

The invention can alter the hygiene habits of people.

Thank you for your consideration,

0001 The field of the invention is a toilet and more particularly, a hygienic toilet having a washing feature and a means for drying subsequent to washing to allow for hands-free cleansing.

BACKGROUND OF THE INVENTION

0002 A bidet is a plumbing fixture or type of sink intended for washing the "private parts" of the human body in order to cleanse after toilet use. Some bidets resemble a large hand basin, with taps and a stopper so they can be filled up; other designs have a nozzle that squirts a jet of water to aid in cleansing. Bidets are commonly provided as a separate fixture next to a conventional toilet. However, most bathrooms are not large enough to provide the space needed for separate fixtures.

0003 Combination toilets and bidets have been devised, but have not been widely accepted for various reasons. For example, some are retrofit kits which are adapted to be mounted to an existing toilet. These retrofit bidets are typically difficult to mount and give the toilet an awkward appearance. Other combination toilet and bidets have been devised as shown in U.S. Patent No. 7,493,664. However, this combination has a large opening from which water can escape making use of the bidet feature messy.

0004 Further, such toilet/bidet combinations are not intended to replace the use of toilet paper since some manual wiping is necessary to achieve adequate cleanliness and drying.

0005 A combination toilet/bidet which also purports to dry the user is manufactured in Japan. However, it has been reported that such models do not provide adequate washing and/or drying. Moreover, such models spray from back to front thereby promoting yeast infections in women.

0006 There is a need in the art for an effective and convenient manner by which to cleanse and dry oneself after toilet.