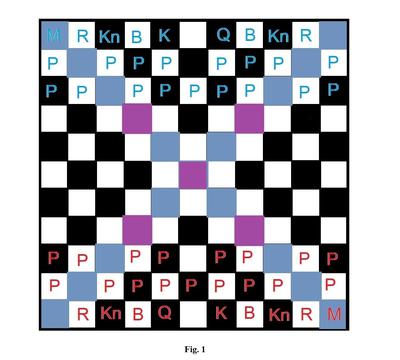 The present invention offers a few nuances that work to provide a completely novel Chess experience.

Objective-
The competitors have 3 main objectives in this game:

1. Use King to 'Seize' a Magician, a piece that spawns in the center of the board at certain intervals.
2. Promote enough Pawns (Magician’s Apprentices) into Magicians en route to,
3. Checkmating the enemy King.

Magic Squares Chess is a novel chess variant, that introduces a new character (The Magician), with a new ability (teleportation). The board has been modified so that there is an 'x' stretching across the board. These are the Magic Squares which fall under the domain of the Magician.

There are 3 levels of Magic Square. Level 1 Is the lone Square at the center of the board which is used to 'spawn' the game's initial (2) Magicians.

Level 2 Magic Squares, on an 11 by 11 square board, are the 4 squares on the 3rd rank out from the Level 1 Center square. Level 2 squares are primarily used as the teleportation circuit which develops Pawns into Magicians. Later they are used by other pieces to teleport behind enemy lines.

The remaining squares making up the 'x' are Level 3 Magic Squares and they are only used for traveling by Magicians. Though if a traveling Magician placed on a Level 3 MS is in the capture path of any opposing piece, that Magician can be captured.

The capturing piece, after the capture will take the space in the 3 o'clock position of the L3 MS or the next available space in the clockwise direction proceeding from 3 o'clock.