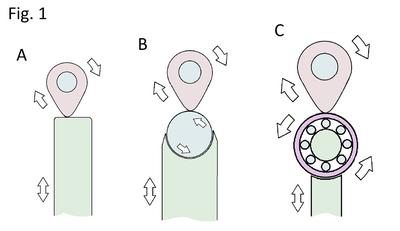 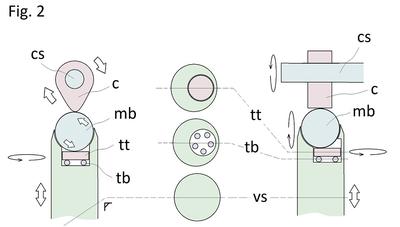 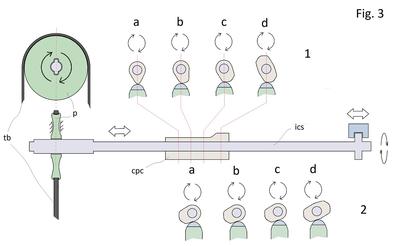 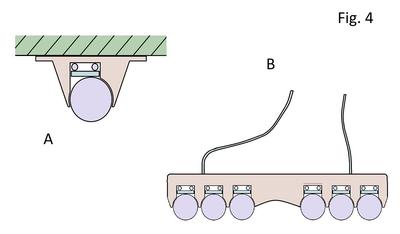 Cam transmission systems exist since antiquity, they convert the rotational motion of an axis carrying a cam into a reciprocating movement of the element driven by the reliefs of the cam (Fig. 1A).

The system is used in a large number of mechanisms.

It is for example what regulates the intermittent opening of the valves of a four-stroke thermal engine, it is also found in the petrol pumps of the combustion engines and in the electric hammers.

The system causes friction forces. Various solutions have been found to limit the phenomenon, especially in automobile where the friction of the valve's stem against the cams is a major problem.

One of the solutions was to ensure the contact by a ball placed in a lubricated housing (US 1 210 871, UK 175 134). The friction forces are reduced by the increase of the contact surface (Fig. 1b).
Another solution was used in the beginning of the twentieth Century (Fig 1 c), it consists in a bearing roller at the end of the valve stem, the main problem is the large diameter of the bearing roller.

The proposed bearing reduces friction forces while limiting the size of the mechanism, it is shown in Figure 2 in several cutting planes.
A main ball (mb) is in contact with the cam (c).
The main ball (mb) lies on the periphery of a turntable (tt) which lies on a thrust bearing (tb).

The vertical thrust of the cam (c) is transmitted by the main ball (mb) to the turntable (tt) portion and the balls (tb) placed below and to the solid portion of the valve (vs).

The friction forces are largely reduced.
The valve springs can be reinforced to allow the motor to turn at higher speeds.
The cams can adopt a profile to cushion the return of the valves in their seat in order to reduce the noise emitted by the engine.

The mechanism allows lateral movements of a cam. A shaft with complex profile cams able to slide on its axis can oppose to the main ball several profiles allowing different modes as shown in figure 3.
A beveled relief (from c to a) allows by an early closure of the inlet valve to feed the engine with compressed air at increasing pressures.
The d profile transforms the engine into a two stroke compressor if the exhaust pipe is connected to a compressed air tank.

The use of this bearing is not limited to automobile, it can be used in all cam transmission systems.

The bearing can also realize a ball caster with original property.

The friction forces are minimal when the motion of the object is perpendicular to an axis linking the center of the turntable to the point where lies the main ball, maximal when it is paralel, the object will automatically return to the first position.

A line of these bearings could also permit to realize a roller ski or a skate allowing lateral movements and generating minimal friction forces when the motion is parallel to the axis of the ski and maximal when it is perpendicular as in natural skiing.