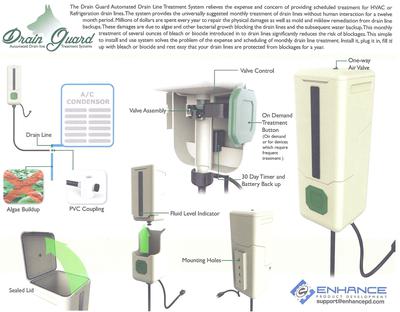 I am presenting for your consideration my United States patent 73925658. This patent is for an automated air conditioning or refrigeration drain line clean-out device.

My device requires no human interaction or water line hook-up yet still gives the suggested weekly measured amount of clean-out biocide for a period of up to one year.

This timing is important due to the fact that normally (especially in high humidity coastal areas where most of the nation’s over 50 million condos are located) AC units are serviced only once a year.

They often get stopped up when unoccupied and can cause expensive flooding damages leading to mold and mildew during that time period. I know because it happened to me in several of our investment properties in Florida as an absentee owner.

The idea for my patent formed as I was looking for something, which would automatically do the suggested monthly treatment.

This unit was designed to augment rather than replace regular yearly maintenance (to service the AC and furnace) and to help keep the flooding condition from happening in the interim.

The product consists of a monthly timing device, power source, a solenoid valve, a control valve and a container for holding the biocide fluid would be part of a treatment only version.

The unit would be mounted on the wall depending on gravity to introduce biocide in to drain line via saddle coupling connector. The biocide container could be a blow molded and attached or injection molded as a one-piece unit.

This simple unit could be sold as a DIY unit and installed by the homeowner or could be installed by HVAC Service Personnel on their yearly service call. This would afford them another source of income from yearly servicing of the unit.

As a DIY unit I believe that a price from $100 to $150 would be acceptable. As one can see this means that it would not only provide a needed service to the consumer but a very profitable item to the supply chain.

There are many patents for devices to deal with condensate drain line problems. None accomplish this treatment over and extended period without human inter-action. There is no device on the market that is being marketed to general public.

The device could also be marketed to commercial food refrigeration units. There are often many bacterial gatro-intestinal problems caused by contamination due to drain line blockages.

Possible additional sales products: Mold and mildew eradicators/cleaners could be included for additional revenue. Bleach or vinegar at 8 oz. per gallon can be used to flush the line but there are many other safe products that will work or one could package a safe product to sell in the future for the periodic refilling of the container by the trade while servicing the unit or to sell to the DIY type home owner.

Furthermore, once a market and brand has been recognized there are opportunities to expand this product line into larger units to service hospitals, ships, office buildings, restaurants and other commercial needs.

The Patent allows for a treat and flush model or treatment only. HVAC professionals have assured me that the treatment only would suffice using condensate to flush.